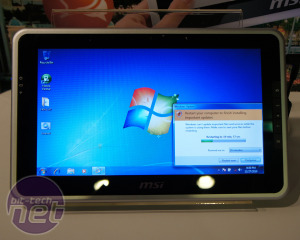 Continuing our coverage on latest announcements on CES 2011, We have here MSI which is totally prepared to steal the show by launching two new next-gen tablets. One is Android based and other one is running Windows.

The Android based tablet is  MSI WindPad 100A tablet. It’s a lean and sleek machine running Google Android OS , on an ARM processor and sports a 10.1-inch multi-touch display. The tablet has a digital compass, a GPS locator, G-Sensor gravity detecting device, an ALS light sensor and most importantly  – Wi-Fi. Yo﻿u also have an option of purchasing a 3G version. It weighs 800 gms and has a battery life of 8 to 10 hours when fully charged.

The Second tablet is called MSI WindPad 100W tablet. It has Windows 7 home premium as its OS and it has the same 10.1-inch screen having multi-touch control screen. It is powered by an Intel mobile processor and 32 GB solid state hard drive.It also has a G-Sensor gravity detecting device, an ALS light sensor, and Wi-Fi. In addition to that this tablet also has MSI’s own Wind Touch software, which helps you to quickly find any application you need using  the software’s “work” and “entertainment” functions with just one click.

Now what is weird in the 100A Android tablet is the ARM processor.Since , we have speculation of arrival of Android 3.0 and Nvidia Tegra 2 by April-May it is really important that the shipment begins before that else  adoption of this tablet may be in a damsel. One thing that disappoints in 100W is the absence of GPS and digital compass. Well,though these tablets have some little shortcoming other features are really stunning and this Gizmo  is all set to get all attention at CES 2011 it deserves.

via: gottabemobile Image via: bit-tech