The Android market is booming – new devices are being released everyday (well, not literally) and they are becoming more and more affordable. So, what do you do with your old device one you get a new one? 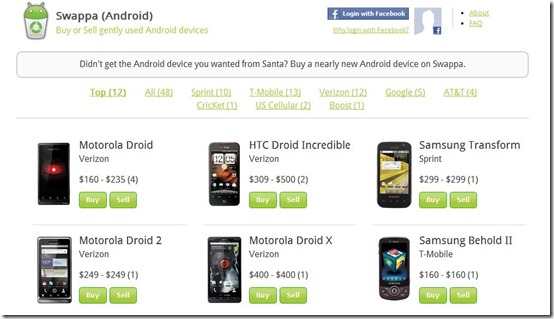 You can sell it, of course, if it is still in good condition. A new startup – Swappa – aims to cater specifically to this market.

All of the devices listed on Swappa are fully funtional and have clean ESN/MSEIDs, i.e. they have not been reported stolen or lost. The devices can be listed and browsed for free – only a small fee is paid by the buyer at the time of purchase.

I think Swappa is a cool idea but it has its task cut out. Right now most people I know of simply sell their stuffs on Ebay. However with its only Android approach, buying an Android phone is much simpler in Swappa. This may attract buyers – which caould in turn attract sellers.

So, if you are looking to sell off an Android device or buy a new one, you might want to look at Swappa.