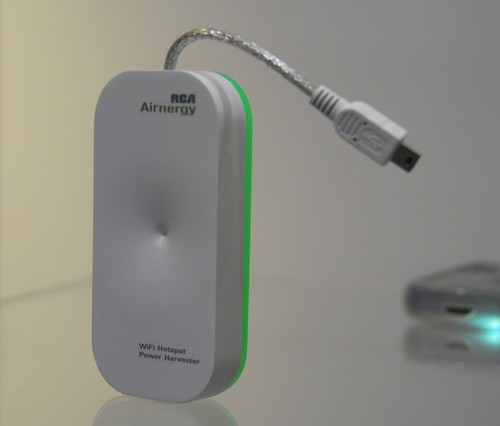 Now a days, even simple little things like Chargers manages to amaze you with thier innovation. This RCA Airnergy USB charger is one such device. It doesn’t need a electrical power source to work, instead it feeds on the energy of WiFi signal. As Airnergy puts it, its a ‘WiFi Hotspot Power Harvester’. Keep the device in a WiFi hotspot zone, plug in the device thats needed to be charged and the charger will start charging your device.

During the demonstration at CES, they were able to fully charge a Blackberry having 30% charge in about 90 minutes. The charging speed will depend on factors like WiFi signal strength, Number of WiFi sources etc. It is priced at $40 and will go on sale this summer.