Last time we told you about HTC’s Facebook Phones in China was when the HTC Salsa was launched there and the dedicated Facebook Key on the phone was replaced with a Weibo button (Weibo is a vast social network in China). Now, HTC’s another Facebook phone “HTC ChaCha” has also made it to China sans the Facebook button. 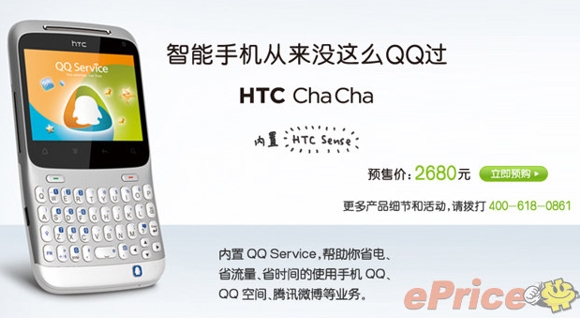 The Chinese version of HTC ChaCha has a dedicated button for QQ – a popular instant messaging platform in China. So, how popular? Well, QQ has over 700 million registered users! This totally makes sense as Facebook is banned in the country and providing the users of this phone in China with a different social network becomes self-explanatory.

Specs-wise the phone is not at all different from the original HTC ChaCha (leaving the Facebook button). Let us throw a quick glance on the specs of this device:

Thanks Dusan for the tip