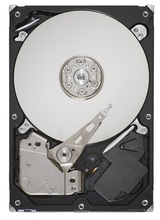 3TB, wow that’s a lot of space. But here is the dark side, XP users will not be able to use it , the drive requires 64-bit OS. Many of today’s computers are incapable of handling drives over 2.1TB. This 2.1TB mark was set 30 years ago when a decision was made to limit the Logical Block Address range on the hard drive. It specifies where blocks of data are stored in a hard drive.

Craig said “Nobody expected back in 1980 when they set the standard that we’d ever address over 2.1TB.” The drive’s full powers will only be accessible with 64-bit versions of Windows 7 and Vista and also some upgraded versions of Linux. You will not able to see the 2.1TB of the 3TB when you are using it with with XP. It shows only 990MB in XP.

There are more technical issues that makes it difficult to use 3TB drive as a boot drive immediately. But using it as a secondary drive wont create any such difficulties. Surely, with the launch of 3TB, price of smaller drives will plunge.