The latest addition to the league of  smartphones is the upcoming Nokia N8. The company made it official, after months of speculation. The phone will be available in Q3. If the rumors are to be believed, its coming on 24 August. 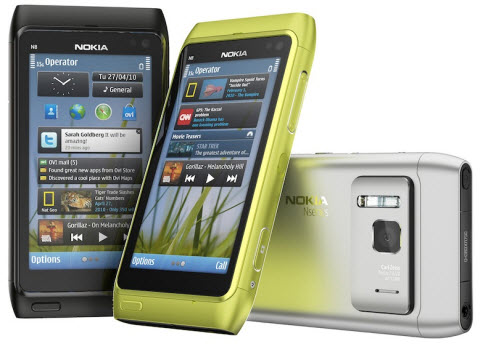 The phone has some best features to offer. It has got a 12MP camera. The pixel resolution is 4000×3000 pixels which results in stunning still images. Carl Zeiss optics enables you to capture great images, and with Xenon flash you can take good quality pictures in low light as well.The camera can also shoot high definition video footage in the 720p quality.  Geotagging automatically records the place at which the photo was taken.

There’s a HDMI connection, so that you can easily show off images,video and music on projectors and compatible televisions , all in 720p resolution.It also features Dolby Digital Plus Technology compatible with home theatre system, so that movies will sound as good as they look.

Now there’s a plethora of smartphones out there with awesome OS. The Android 2.2 Froyo, the iPhone OS 4, and now Symbian ^3. Clearly Symbian doesnt’ have , what it takes to make it to the top. Earlier this year in Feb, the next level of Symbian was overshadowed by Windows Phone 7. Also, the launch is quite late as compared to HTC EVO 4G and iPhone 4G, by that time the sale of these phone will reach huge numbers.