Nokia has released a statement stating that Nokia maps will be available on iOS and Android smartphones from now. However, this will not be an App but the service will be available as HTML-5 based web service from the Nokia store.

With this feature becoming a success on Nokia phones, this step seems positive from the Finnish maker. In addition, users can have access to Navigation support during driving or using a public transport. You can also use audio directions too but only when you are on foot! 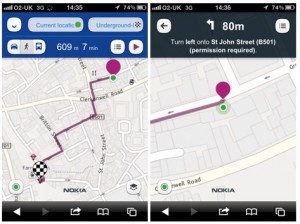 There are drawbacks using a web-based application over a natural one; the app needs permission and only then, you are allowed to access the location and it needs to be done whenever you access the application.

This step of introducing the Nokia Maps into devices gives some statements that Nokia is trying to compete with Google maps, the much established and widely accessed for getting info on directions and Maps. We might also see integration into the tablets, but it is only our estimation. This feature will be available on iPhone, iPad and Android (2.3+) devices and can be accessed directly from m.maps.nokia.com.